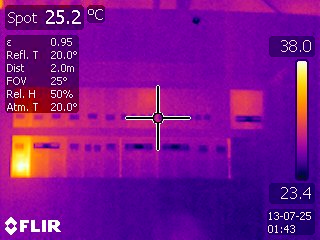 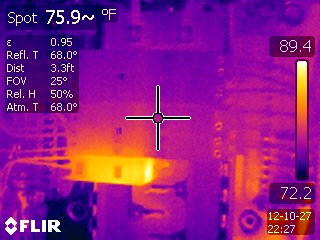 Superman has the super power of “X-ray” vision which allows him to see behind walls or inside houses.  Imagine if you have that power before you buy your next house?  Read more about infrared thermal imaging and seeing behind walls.

A picture of a basement window. The thermogram shows the temperature differences on the drywall below the window. This indicates a possibility of missing insulation behind the drywall or the drywall in purple/blue is moist. We always investigates further before making any conclusions.

So why does the drywall under the window clearly show a cooler temperature?  Recall that blue is cooler compared to red or orange. If the temperature was not significantly different, we would not look further into this.  The mostly like two reasons include missing insulation behind the drywall or the drywall is moist.  We use a moisture meter to eliminate the moisture issue, leaving the missing insulation the  most likely explanation.  However, if the moisture meter indicates moisture, we inspect the window well and window still closer for signs of moisture damage.  We always confirm with a moisture meter reading before concluding moisture damage.

If the moisture meter comes up positive and the window still shows moisture damage, depending on how long this condition has gone on for and whether the immediate area has good ventilation or not, this could be good conditions for mold growth if left unchecked. Also, behind the drywall would definitely be subject to mold conditions as ventilation is nil plus the ample moisture supply.

A quick scan with the Flir B-250 gives the home inspector an idea of where to investigate further.  The scan is non-invasive and does not damage the walls or any other part of the house.   This makes the inspection fast, accurate and provides clients with proof of defect or damage.

What is infrared home inspection and why you should insist to have it before you buy your home.

A side by side picture and thermogram of basement window leak, the purple color area below indicates cooler temperature and hence high probability of moisture or a lack of insulation below the window. We always confirm with moisture meter reading before drawing such conclusions. The basement window leak detected by infrared camera Flir B-250